Diseases, illness, sickness, we would have been so fortunate if these words have never existed, but unfortunately, these are part of our lives and with this, we also have to be in sync with the different treatment options available and in any case, how to pick the best one. Choosing the best treatment option for a particular disease can get really confusing considering the merits and demerits of the available treatment methodologies, i.e. allopathy, homeopathy and Ayurveda.

A Comparison Between Allopathy, Homeopathy and Ayurveda

Though Ayurveda is the oldest system of medicine, originated and used in India since ages and homeopathy slowly is making a mark amongst the different medicinal systems available, but when it comes to the most preferred choice of medication, allopathy has the lion’s share of the market.

With the rising confusion and myths associated with these medications, it becomes important to compare all these medicine systems (allopathy, homeopathy and Ayurveda) to find out the major differences between them and to get an idea which one is ideal or best suited for different diseases at different times.

Allopathy is derived from the Greek word állos (other or different) + pathos (disease or suffering), which means “other than the disease.” Allopathy is essentially a piece of the western therapeutic framework and is spread everywhere throughout the world. It is received by the majority of the nations around the globe and commonly called as drug therapy. Allopathy is basically a drug oriented methodology and relies on three things, hypothesis, experimentation, and the result of the experiment.

In this methodology, allopathic doctors are restricted by what they can do on the grounds that they just have to concentrate on the symptoms of a disease and not on the causes of those symptoms. It appears that there is a pill for each evil and then, a pill for all their side effects. It is known that allopathy only offers a partial cure, as the drugs are made to only cure the reaction and not the root cause. The effectiveness of allopathic medicines during an emergency is the fundamental reason why it is adopted by most of the people all around the world.

The main disadvantage of allopathy is that most of the medicines are associated with some side effects. The pill given to treat a disease cures that particular disease but might give birth to another disease in the body. These side effects can be internal or external. Once the disease is cured, a person needs to take medicines to adverse the side effects caused due to that medicine.

For example, if a person takes allopathic medicines such as a Paracetamol tablet to cure fever. The tablet brings down the high body temperature to normal but the tablet also has a harmful effect on the liver.

#Fact: It is important to note that there is no place for individuality in allopathy as the same pill is given to the patients suffering from the same disease.

Homeopathy, the name is derived from two Greek words (hómoios + pathos) meaning “like disease.” It means that a substance which causes the symptoms of a disease in a healthy person will cure the same disease in a sick person. (We bet you will read that again). According to this methodology, substances that produce symptoms of a disease will have a curative effect on a sick person exhibiting the same symptoms, when given in very dilute quantities.

Homeopathy is a holistic system of treatment that originated in the 18th century and has been proven to be safe, effective and curative. It has been in use since last 200 years, by hundreds of millions of people. It embraces the body’s natural response system by attacking the root cause of illness or by encouraging the symptoms of healing. This is why it is meant to completely cure a disease. The homeopathic medicines are non-toxic and do not have any side effects. It works by using very small doses of potential substances to stimulate the immune system which helps in healing the patient naturally.

Homeopathic doctors seek to cure their patients not only on the physical levels but also on the mental and emotional levels. The treatment is aimed to cure each patient as per their individual needs.

Homeopathy is generally known for its non-toxic nature as it uses medicines in very small quantities, have minimal chances of any side effects which makes it a good treatment option for children also.

#Note: Homeopathy does not encourage both the use of homeopathy and allopathy simultaneously for the same disease (allopathy suppresses the symptoms of a disease which makes it difficult for a homeopathy practitioner to judge the condition of the patient and decide what medicine to give or what the potency of medicine should be).

Ayurveda is a Sanskrit word which is formed from two words, “Ayus” meaning life and “Veda” meaning knowledge or science. So the term Ayurveda resembles, “The Knowledge of Life.”

Ayurveda is also known as the science of natural healing because it derives its medicines purely from nature. Ayurveda is originated in India and is 5000 years old medical knowledge system. According to Ayurveda, body, mind, and spirit are connected with each other.

The most part of Ayurveda is connected with the cures accessible from nature. It also deals with the root cause of the problem and is a permanent cure in most of the cases. In most of the cases, a patient treated with Ayurveda not only gets cured but also gets the permanent immunity. The main advantage that Ayurveda has over homeopathy is that the former just uses the natural means to cure a disease and is the most eco-accommodating approach to get cured. It has been proved that –

“Ayurveda is the mother of all the medication”

and every other type of medication is derived from the science of Ayurveda.

It is believed that Ayurveda follows the “Five Great Elements” theory, which insists that the “fault,” “tissue,” and the “impurity” should be in harmony with all the five elements used to form this human body, i.e. Prithvi (Earth), Jal (water), Agni (Fire), Vayu (air) and Akash (space). According to this methodology, there should be a balance in the three elemental energies, Vayu (air+space=”wind”), pitta (fire+water-“bile”) and Kapha (water+Earth=”phlegm”). Ayurveda explains that, when these three energies are in a balanced state or exist in equal proportion, the body will remain healthy and if they are not balanced, the body will become unhealthy in many ways.

#Myth – Ayurveda takes longer to cure – Time taken to cure a disease in Ayurveda depends on how much imbalance the patient is carrying and from how long. Generally, the time taken by medicine to act in the body is between 20-25 minutes.

How is Ayurveda Different From Homeopathy? 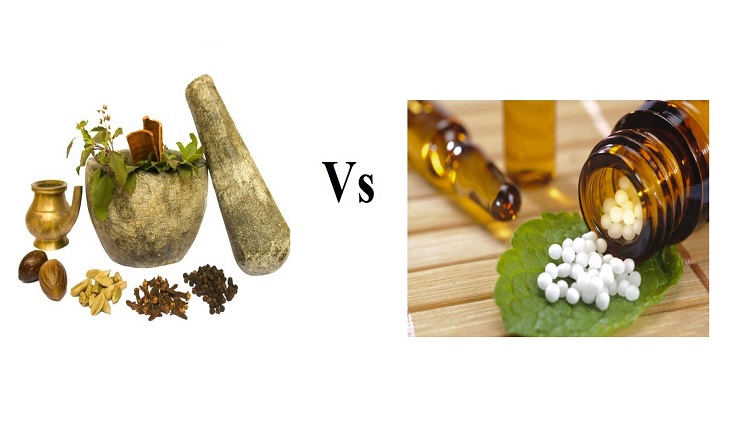 How is Homeopathy Different From Allopathy?

How is Allopathy Different From Ayurveda?

Side Effects of Allopathy, Homeopathy and Ayurveda

Allopathy: It is associated with a chain of side effects connected with every medicine, which can be internal or external.

Homeopathy: Generally homeopathic medicine does not have any side effects when taken in adequate amount and proper guidance of a practitioner.

Ayurveda: Ayurveda is merely associated with a few side effects which are very mild in nature.

All the medicine systems, allopathy, homeopathy and Ayurveda have their own merits and demerits and your choice should depend on the disease, cause of illness, possible ways of treatment etc. Homeopathy is really effective in treating both acute and chronic illness as it treats the root cause of the illness which is not in the case of allopathy. Allopathy has a good investigation, testing, and practicing system. It relies on many tests, techniques, scans, surgery etc. and has been widely used all over the world, but it alleviates the symptoms of the disease rather than going deeper into the cause. Apart from this, allopathy is also associated with side effects and allergies.

Allopathy has a good investigation, testing, and practicing system. It relies on many tests, techniques, scans, surgery etc. and has been widely used all over the world, but it alleviates the symptoms of the disease rather than going deeper into the cause. Apart from this, allopathy is also associated with side effects and allergies.

Ayurveda and homeopathy believe in individualistic approach and treat patients accordingly. Apart from the medicine, these types of treatments focus on the whole lifestyle such as diet, attitude, exercise etc. But these methodologies also have some loopholes. There is a shortage of practitioners, lack of proper scientific research & investigations and proper boards to manage practitioners or standardise the medications.

If you are in a hurry, don’t worry, we have a short and straight video for you:

Which medicinal system you prefer between allopathy, homoeopathy and Ayurveda, and why?

2 thoughts on “Allopathy, Homeopathy and Ayurveda: A Comparison”

Scroll back to top